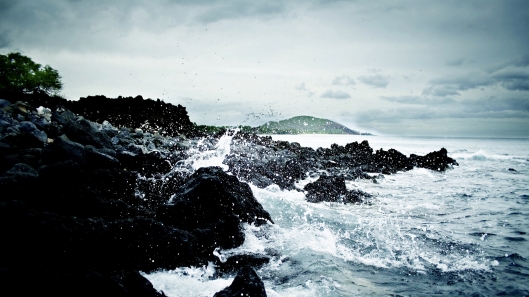 His wasn’t just a passing monologue, it were a repertoire of rudimentary memoirs. Of the millions cached in the huge sachet of what he called his little treasures, some lit up unlike any others. He had always thought of himself a painter of battles, a silent vigilante, a rock on the shore- only to be hit at, taking it all. There, looking at the waves, distant but ever involved, on the endless canvas of imagination, he painted his photographs.

And when a wave strong enough came crashing down, he safely stored what he had painted in the little book called life. While most were no more than scribbled notes in the margin, every once a while, he found some good enough to form paragraphs. Very, very rarely, he were lucky enough to do paint a masterpiece, and they would form his chapters. Oh, it was heartbreaking when his chapters ended! And once, only once he met someone, someone so integral, so special- he put her name in the title.

Ever met someone who even the air smells of even when they aren’t there? You close your eyes, and you can breathe the scent of their neck, the touch of their lips, the warmth of their fingers, the taste of their tongue! You look forward to the mornings just because you can wake up next to them, the nights so that you can sleep with! The time in between tends to be wonderful just because they are around. You find yourself catching a lazy grin and you don’t know why! And you think you would do anything to let that feeling last forever. They knew it might not end well, they knew the days ahead might be black, but together they would make it the best shade of darkness they’d ever seen. They would laugh and cry, and smile at inappropriate times; walk in the snow- hand in hand, and grow old together, listening to the idiosyncrasies of the other. And once a while, she would ask him what she meant to him. He always showed her the book, and she would know.

Years later, she found herself again at the shore. Time had torn them apart but she always knew where find what remained of him. He was long gone, but she found his book. A tear escaped her eyes and she spoke to no one in particular, “why aren’t there any new entries, you promised, you promised you wouldn’t stop.”

He never did, till the day he died. The pen never left his hand, (with her gone) just the ink went dry.